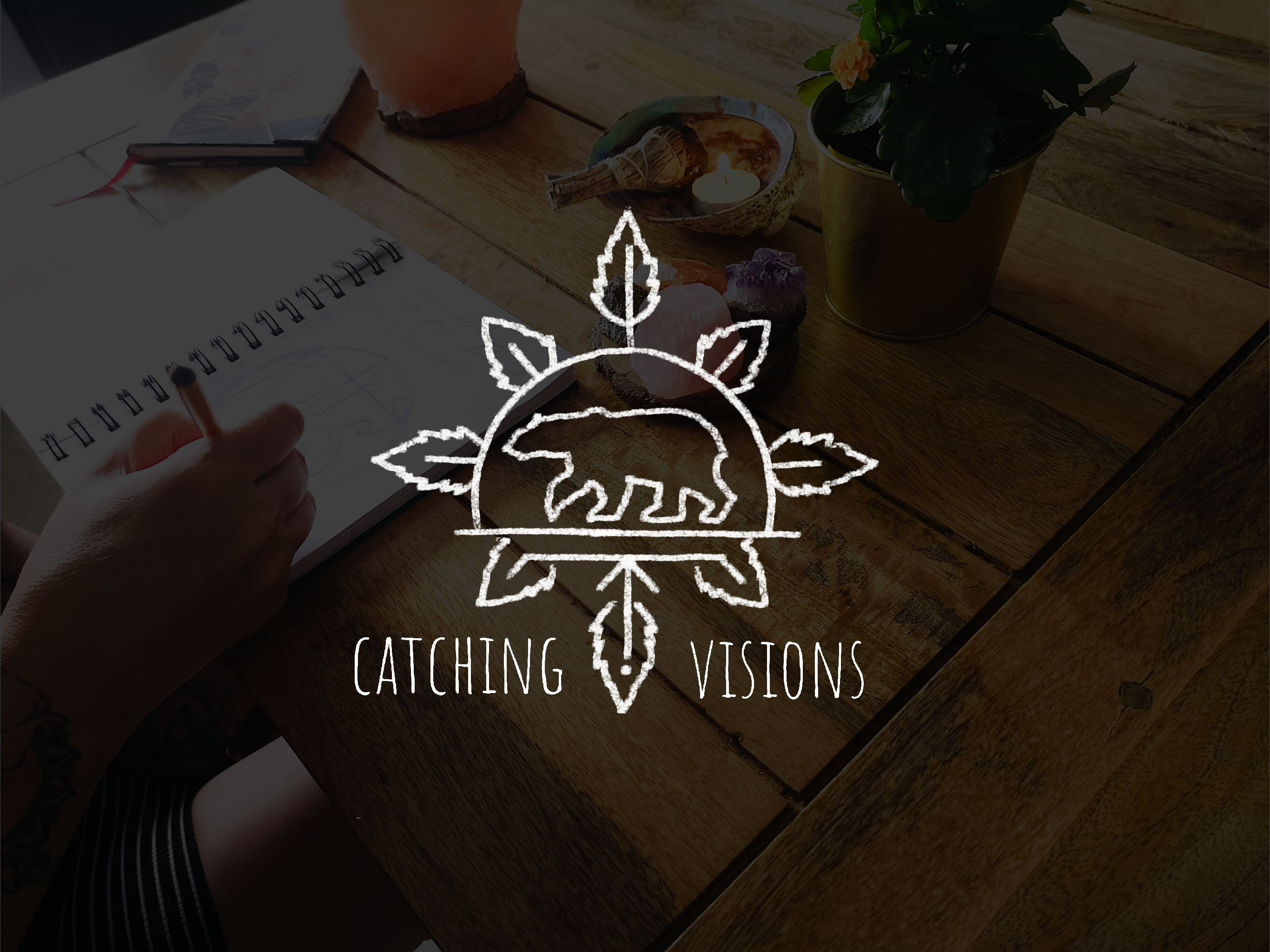 Catching Visions provides a powerful consciousness and science-based education for personal growth. A source of learning that aims to dive within to unfold and develop our full potential.

Where you learn from an array of transformational energy techniques, and how they can be your integral day to day practises. Methods and tools to advance yourself intuitively, artistically, spiritually and vibrationally, to support progression in all areas of your life.

This platform has been developed to enhance ways of working with your own intuition, your core navigating sense that is so often overlooked.

"The most beautiful experience we can have

the fundamental emotion which stands at the cradle of true art and science."

Connecting to Your Intuition

And why you would want to 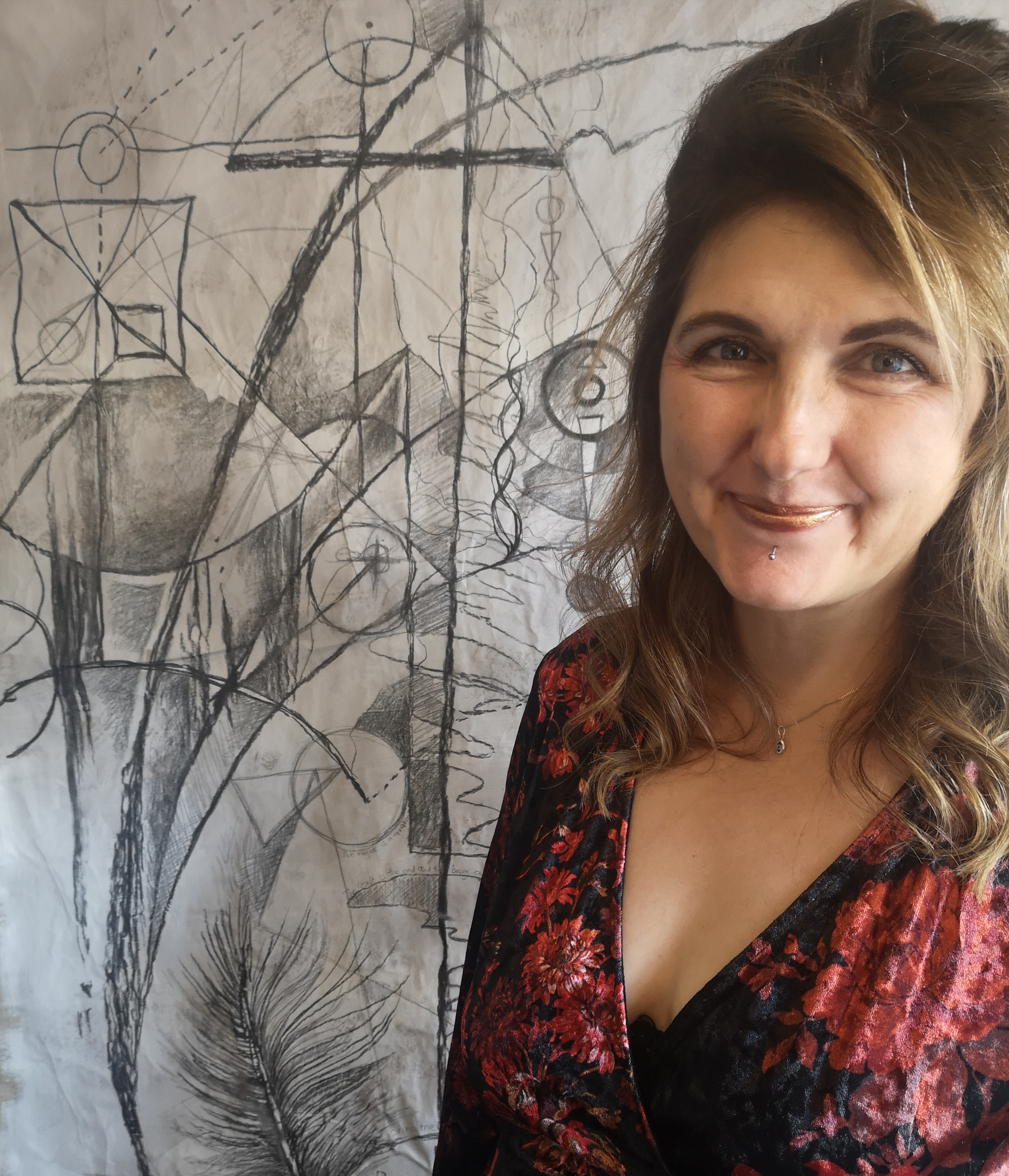 This leads us into introducing the extraordinary

Cherianne has developed a journey of self discovery. Using her experience in meditation, awareness through connection, and the exploration of intuitive art, she opens doors to true potential.

She wishes to share her insights and wisdom, accumulated over 20 years of expanding her awareness, and through the parallels she has discovered within the realms of creativity. The subsequent benefits, not just her creative expansion, but also in the everyday, the practicalities and decision making aspects of life, has been beyond measure.

Trying to control outcomes in life can be overwhelming, draining and stressful. Cherianne felt her escape into her art, in itself, was a path to letting go, embracing intuitive flow and the joy of mystery, and realising how then these creative practices expand your conciousness.

Life is said to imitate art.

In her dedication to consciousness practices, she found her pieces became more and more insightful, and were eventually one and the same - her work always being meditative, and channelled in it's creation.

In reaching an understanding of the gift she had for purely intuitive art, her wish was to then share all that she had learned.

The effect Cherianne's guidance has had on others has been profound.

It has been known to transform negative blocks and open up opinions of what seemed possible on a personal level. It was often discovered, through the expansion of their awareness, that their intrigue in new possibilities was reawakened.

They had discovered a taste of the freedom which had often only been experienced as their younger selves - that urge to sample new ways of working which often gets lost over time.

This opens exciting prospects and opportunities to let the imagination fly, and to discover what that flight offers in the way of ongoing self growth and the realisation of potential!

Releasing expectation in expected outcomes opens up an opportunity to become a creator 'for yourself'. The practice in itself simply being enough, with no attachment to result. A feeling of unchained expression that you can't wait to get back to.

This is the mindset that Cherianne fully realises in her work, and one that lays an easy path to experimentation. Finding that creation becomes a play pit for ideas, gives way to the realisation that this perfectly relates to so many other aspects of your life.

It's a wonderful thing to find simple elements which you respond to, a set of colours, or maybe a style of mark making, this is often a mystery in itself - then, the magic happens- and this becomes the simple element which can ignite the imagination!

And so it begins.

It is a huge pleasure to introduce Cherianne's innovative teaching and expansive guidance to Catching Visions.

These are exciting times, where expanding awareness and catching life affirming ideas is enlivening, and enlightening for us all. 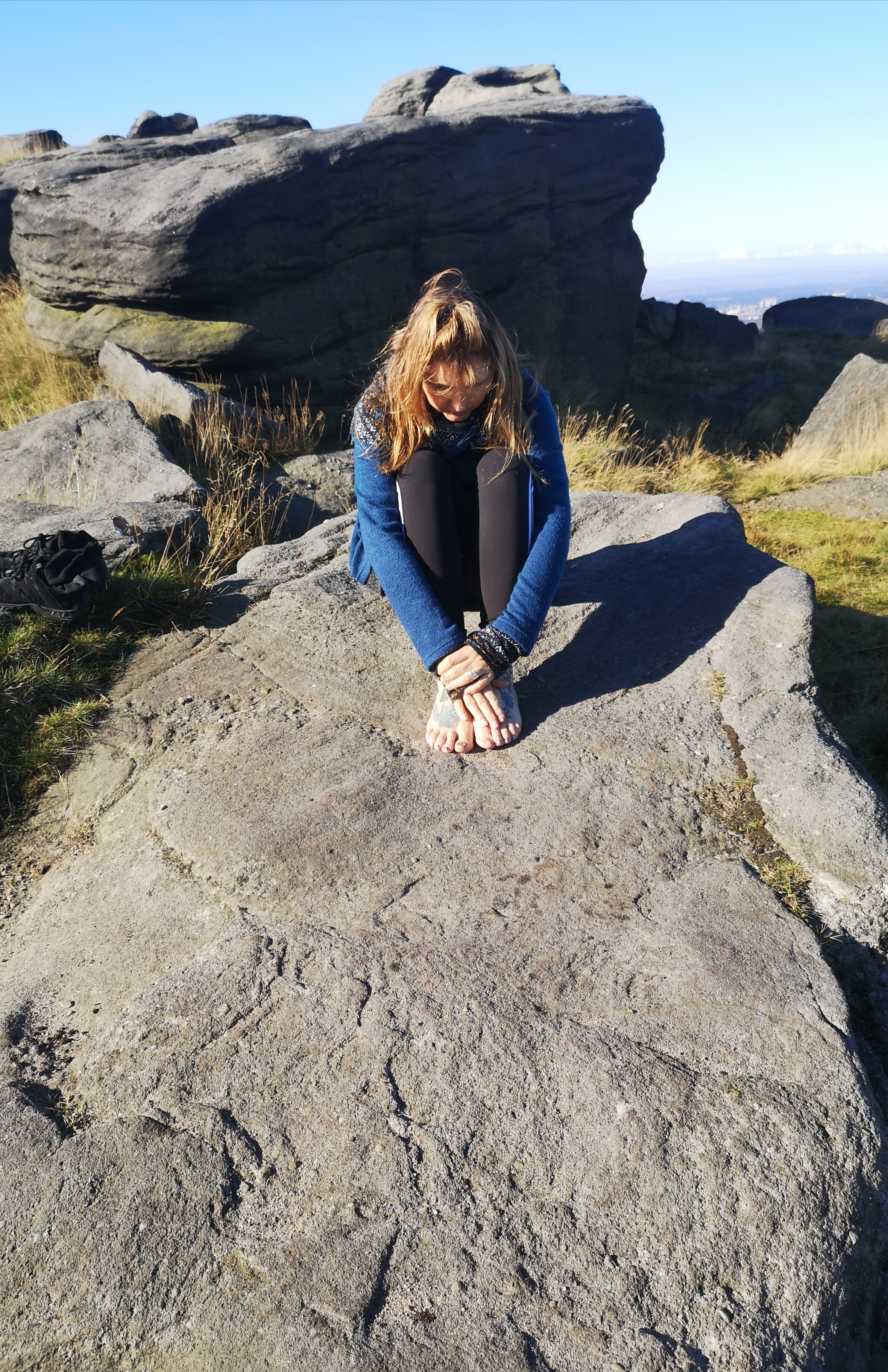 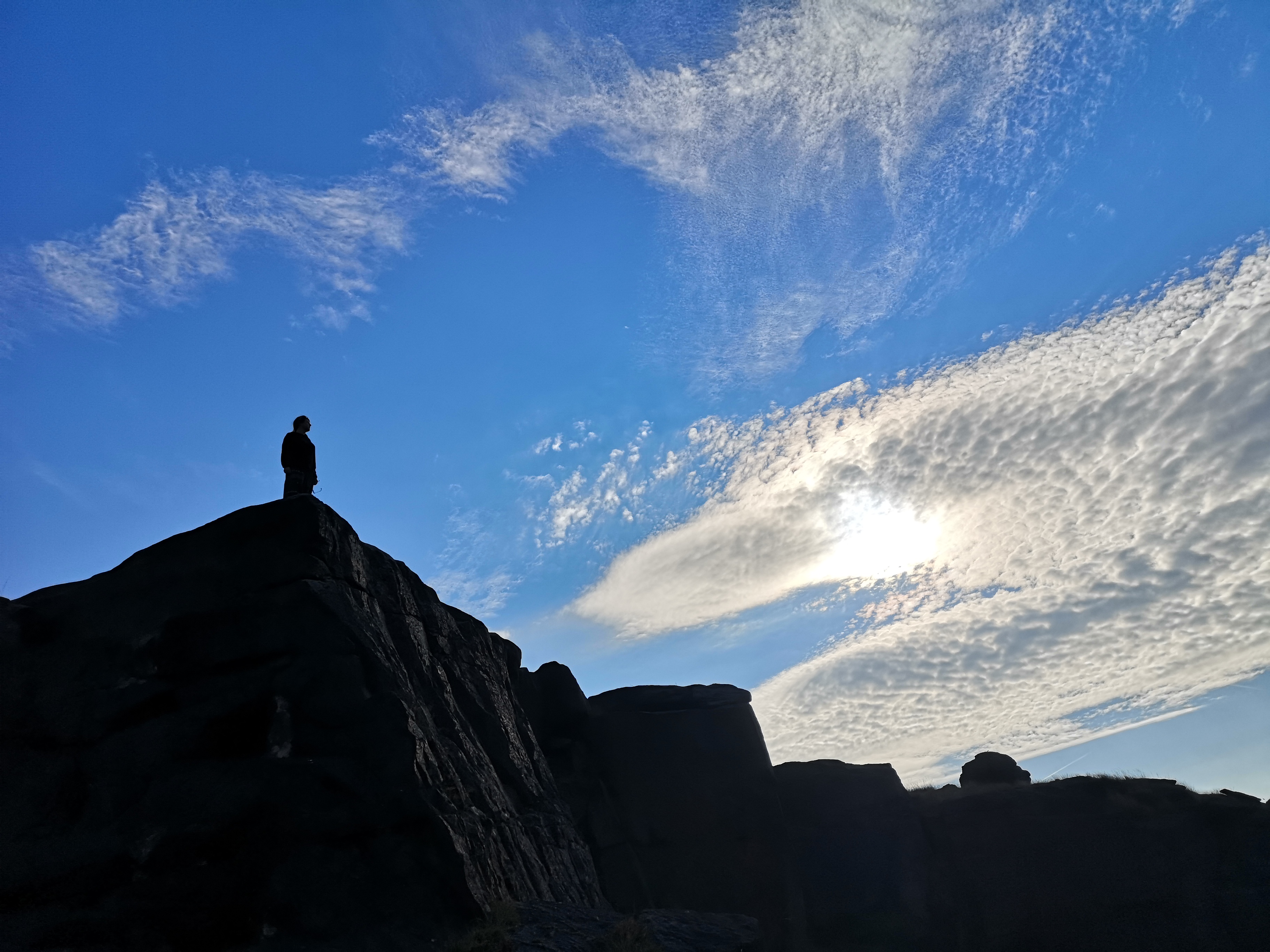 ﻿"I believe everyone has the ability and the gifts to express something valuable in the world. I intend these courses to be a useful aid, and a forever growing companion to that journey, to shine a light on your intuition and creativity.

I would be honoured in being your guide on this journey, and love the thought of how life changing it could be for you."

See Cherianne Dawn's page for more insight into all her work- 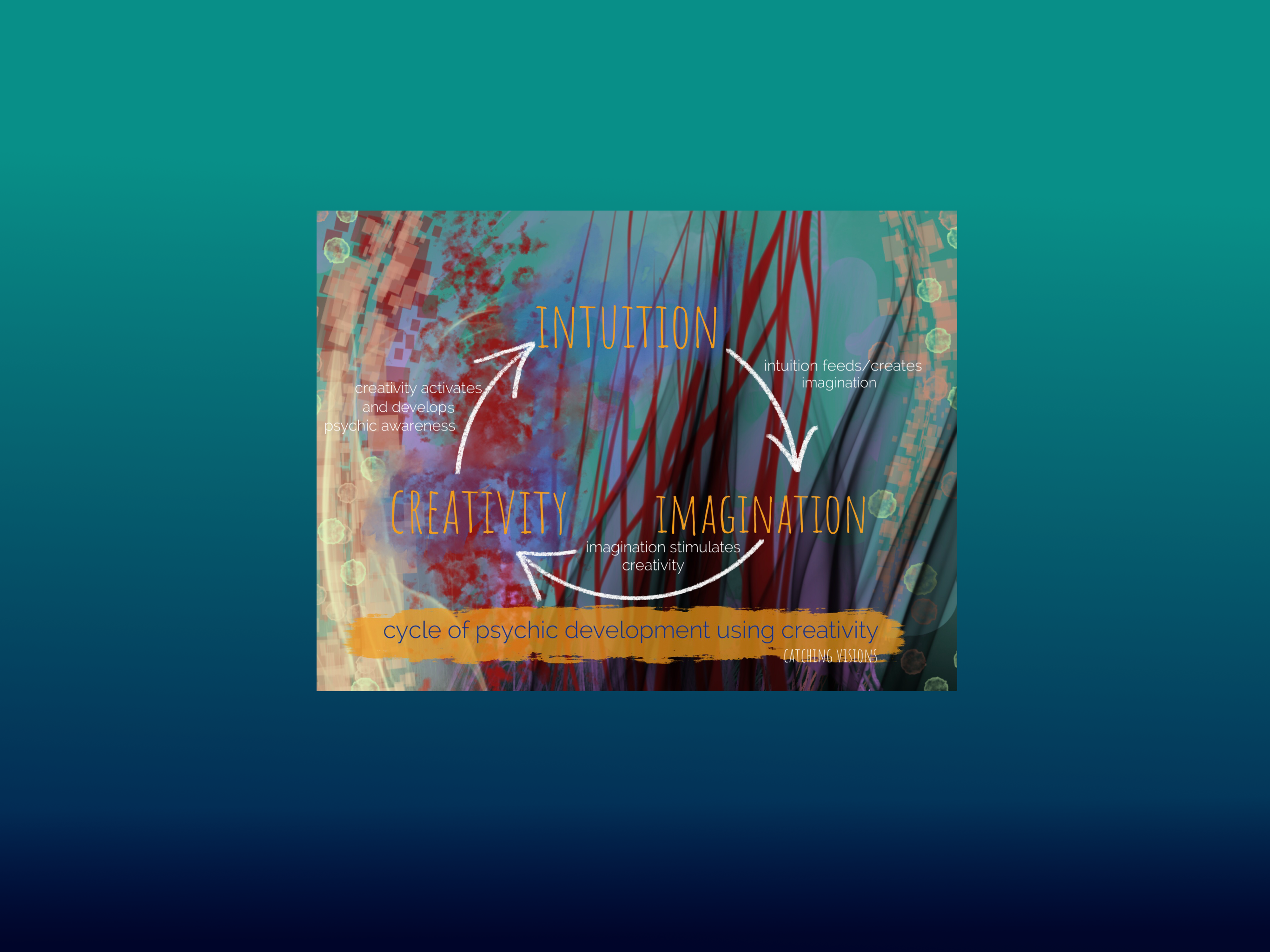 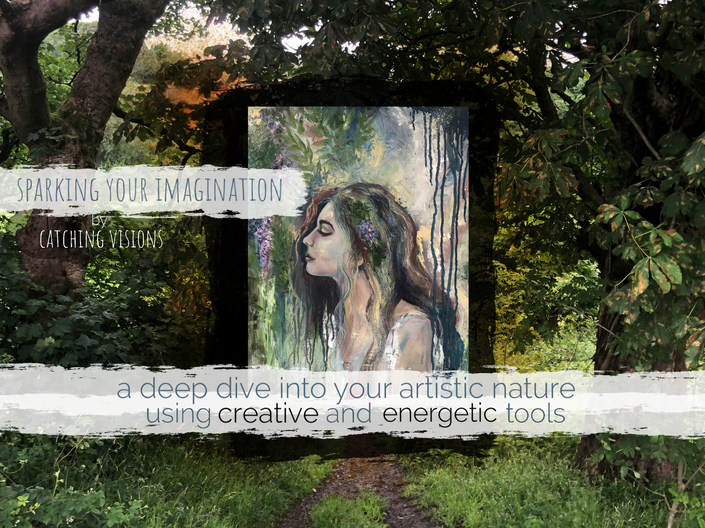 Sparking Your Imagination - Module One / The Intuitive Artist

A Deep Dive into Your Creative Nature using Energetic Tools 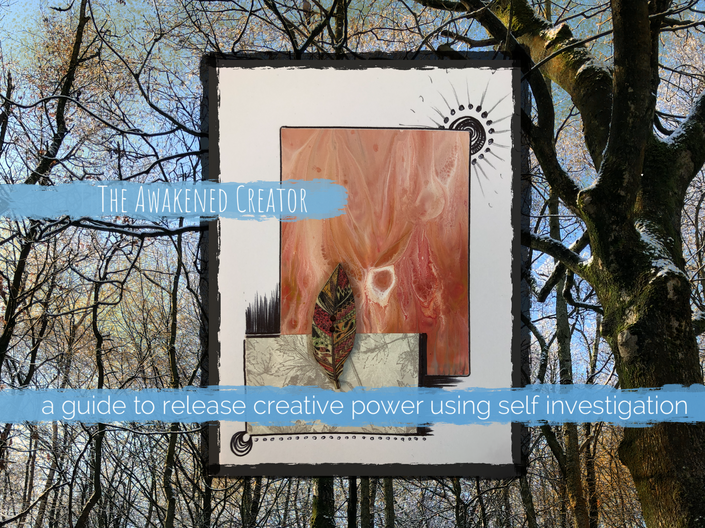 A Guide to Release Creative Power using Self Investigation 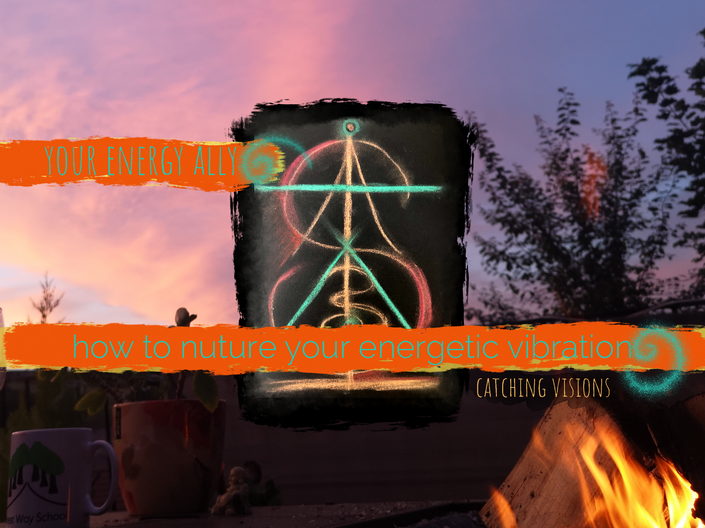 How to Nature your Energetic Vibration 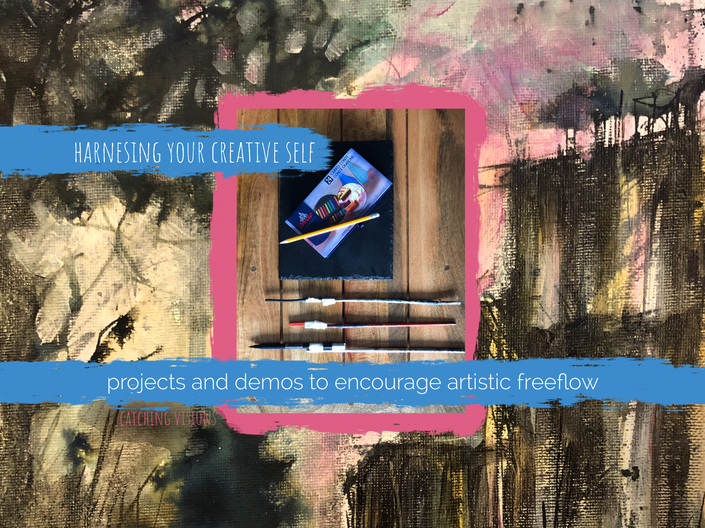 Harnessing Your Creative Self - Module Four / The Intuitive Artist 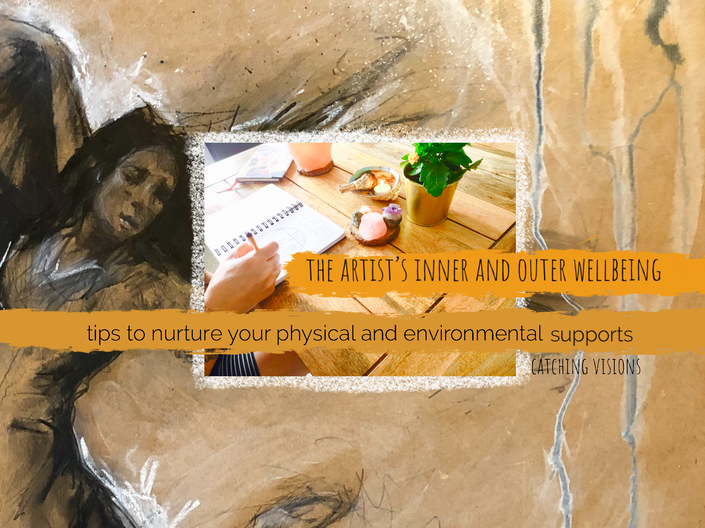 Tips to Nurture Your Physical and Environmental Supports 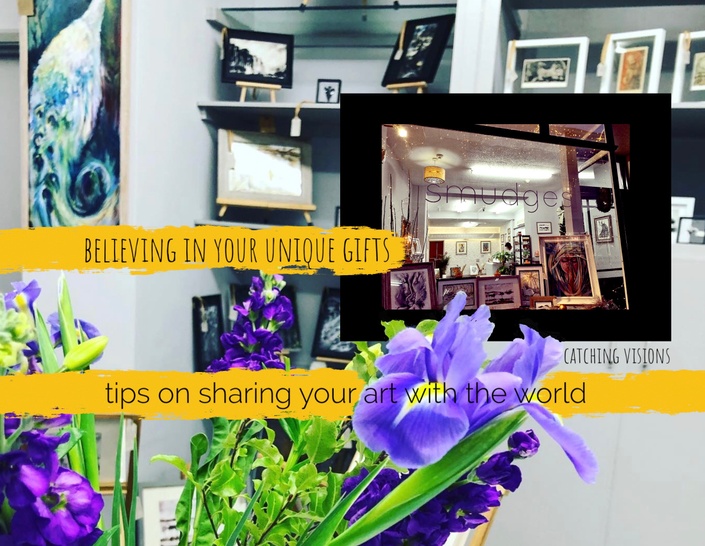 Believing in your Unique Gifts - Module Six / The Intuitive Artist

Tip on Sharing Your Art with the World 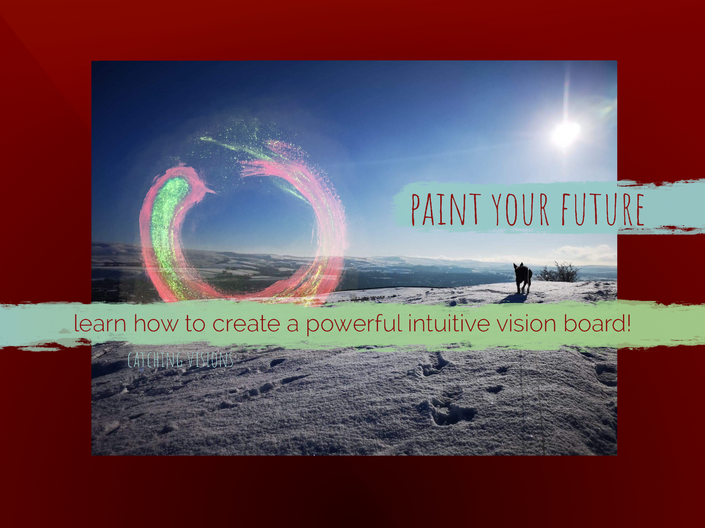 Learn how to create your own transformative intuitive vision board! 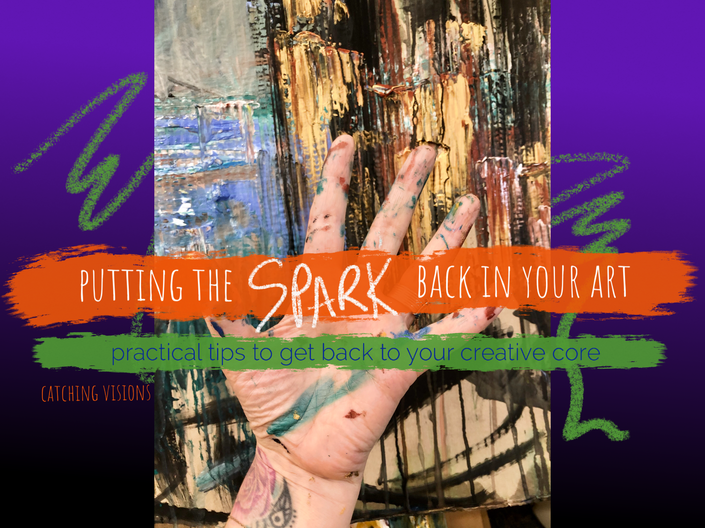 Putting the Spark back in Your Art

Practical tips to get back to your creative core 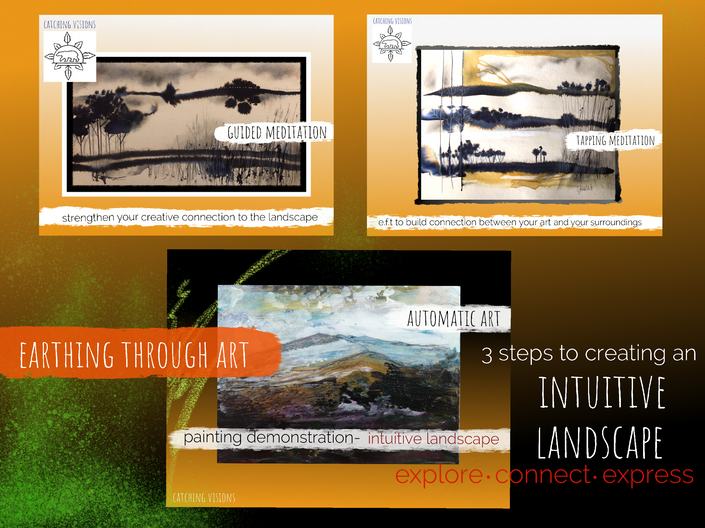 3 Steps to Creating an Intuitive Landscape 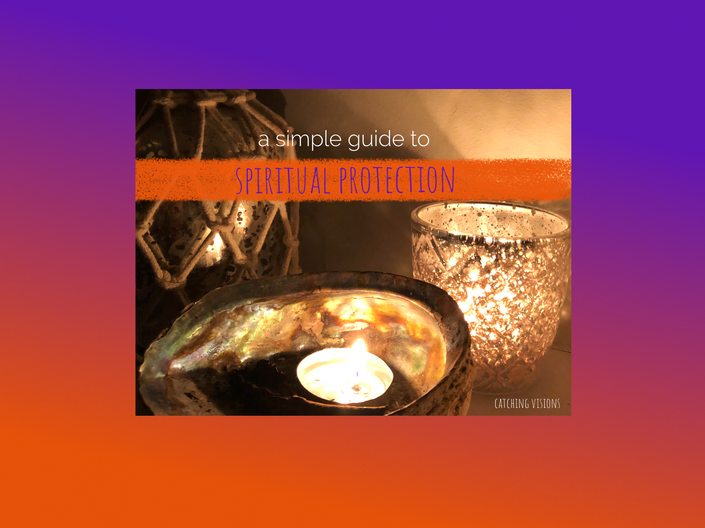 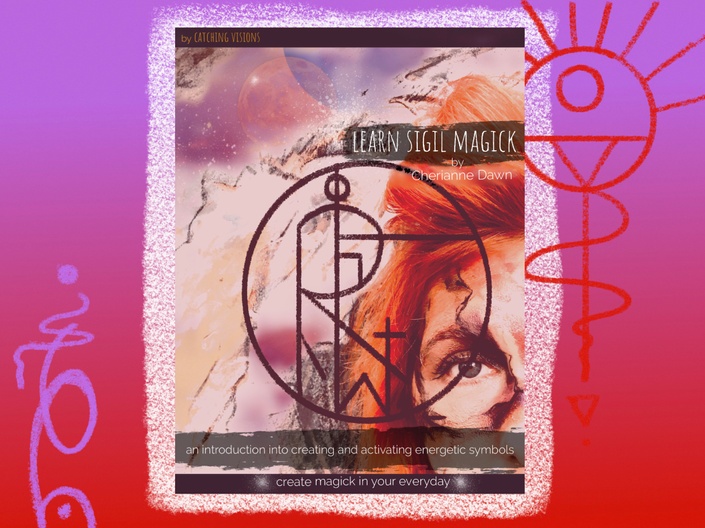 An Introduction into creating and activating energetic symbols 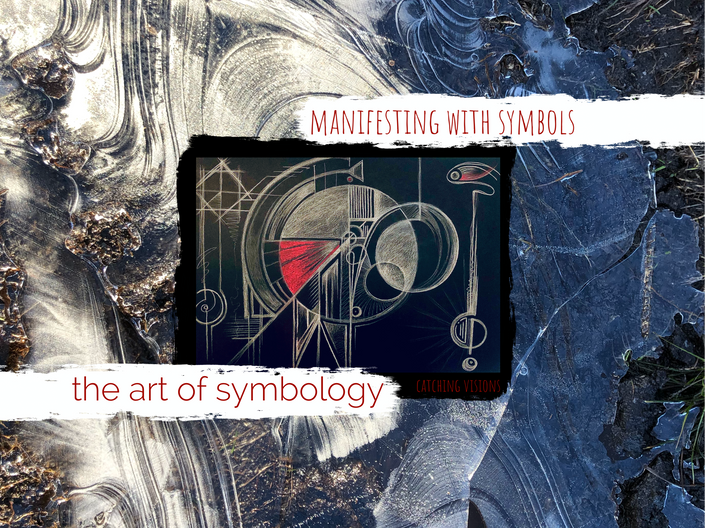 The Art of Symbology

What is Catching Visions about?

'The results have been amazing for our students. Being so driven by what they achieved and uncovered about themselves, it set them off onto new entrepreneurial projects. It was so unexpected for them, but as been the most rewarding feeling!'

"Intuition is the whisper of the soul."

"I've known Cherianne for many years and I've always been a fan of her art and her effortless talents. A chance conversation lead me to her Catching Visions online school, and these videos inspired me to try painting after years of constantly telling myself I had no artistic ability. She has given me a relaxed approach to art. It's mine and I can do what I want with it.

I have a completely different attitude to trying art now. Cherianne has encouraged me and steered me in the right direction. I'm trying out more and more ideas now and I have so much confidence in doing so. It has willed me on to do more and this keeps me going and trying new things. I've started to upload pictures of my paintings to online social media sites and the positive attention and comments my paintings are getting is a massive shock and total surprise.

I didn't think anyone would pay attention but they are.

Painting has given me something to look forward to. I think without a doubt Cherianne has finally made me realise I can do this and I am having a wonderful time proving her right. I cannot thank her enough for helping to bring this creativity out of me.

"Cherianne is intuitive , creative and enthusiastic. She has that rare ability to transmit spirituality and creativity in a way that is both easy to understand and personal to the individual. As an artist she is fearless and extremely talented and insightful. She also imparts these gifts to others. These are great qualities much needed now and in the days to come."

"Cherianne Dawn is an amazing intuitive artist! She has the ability to connect deeply with Spirit and to receive in depth information from both your Spirit Guides and her own and then translate these into breathtaking works of colour, energy, and aliveness. She has a great personality and is very humble and approachable. She explains things in a clear and down-to-earth manner that really makes the world of spirit both accessible and come alive with meaning."

"Cherianne is a truly unique and gifted soul and her art reflects this. She has the rare combination of being extremely talented whilst being very humble. Her art is simply inspirational and her process makes spirituality easily accessible to everyone. After I have been with her, or been speaking to her, I always find that my own psychic ability has increased and that I have ‘opened up’. I have not had this with anyone else I have met. She has endless patience and brings out the best in everyone she meets. The messages she receives from spirit are always accurate and relevant and she communicates these messages effortlessly. Teaching comes naturally to her and her approach and manner is warm, gentle and none judgemental. Could not recommend her courses or teaching enough!"

"Cherianne is one of those rare artists who practice's spirituality and art and is able to join them. She has such a passion in both, whenever she talks about it you cannot help but listen and you feel like you have to try it or get into it. She explains everything in great detail, but simple enough so everyone can understand. She is sweet, lovely, and has a massive knowledge of life, art spirituality, and science too."

"I'm not good with words all I know is the first time I met Cherianne I described one of her guides hoping that she was receptive and luckily she didn't look at me like a crazy lady she actually pulled out a piece of art she had done and there she was the guide that was stood next to her ! So that says it all. She simply has a gift where she can put spirit and energy into her art. I didn't need any more evidence than what spirit gave me the first day we met ! To teach this to others is a gift that she has in abundance."

"Having known Cherianne for many years, I truly believe others can benefit from her years of creative experience. Her attitude and enthusiasm towards her art is infectious and her skills show great adaptability and progression in many mediums. With her calm and encouraging approach, I feel this course will help to inspire and satisfy even the most novice of artists. Being a huge fan of her work, I can't wait to get stuck in!"

"Cherianne has a brilliant flare for creativity and art! She is calm and understanding and fabulous at explaining her ideas and creations in a way I was able to understand."

"She will show you and explain her ideas and be understanding. Cherianne is amazing as a person and with her work. She never makes you feel down and lifts you up every time."

"I've known Cherianne now for a number of years, She is very intuitive and always knows exactly what I'm after when I give her my ideas. The artworks she produces are amazing! She is brilliant at listening, always making sure you understand and is very patient too. Highly recommend this fabulous lady!"

Thank you So much for my Life Path session last week!

I felt really comfortable with you straight away, and as soon as you started channelling the messages. I was getting shivers from head to toe so I know that my guides were with me and present throughout!

The guidance that you channelled for me has been extremely helpful, especially as there were unexpected too, which I am now working on healing and understanding on a deeper level.

I felt like I could have carried on chatting to you all day! You went above and beyond to give me the reading I hoped for, and even sending me the intuitive art afterwards was so so lovely.

I'm hosting a group programme from november onwards, and i'd love to potentially invite you to do a guest speaking slot for the women who join the programme - maybe a group reading or to tell them more about intuition, tapping or life path readings. Something spiritual that they can get value from.

I had my first ever spiritual Life Path session over zoom with Cheryl and she was absolutely brilliant! Cheryl instantly picked up on my strong yellow solar plexus energies & went into depth explaining my aura more than anyone has before. Cheryl picked up on recent conversations & situations currently happening in my life without any prior knowledge and channeled messages & answers to my questions around them.

I came away feeling so reassured, motivated & relieved that I’m on the right path in my life & career! I would recommend her to anyone needing a boost or assurance in certain areas. Cheryl also kindly gifted an additional intuitive life path symbol & card reading to me after our session.